Spring festival is the time when families gather for festive celebration meals. This year, pre-cooked meals command a larger presence on palates across the country. Xu Hua has more.

It’s Spring Festival season, time to prepare a festive feast for the family. What Pang Ruirong might lack in cooking skills she makes up for with her fridge.

PANG RUIRONG Zhanjiang Resident “Qiang, I bought some pre-cooked foods from supermarket, take it out and heat it so we can eat.”

Young people like Pang are increasingly favoring food that’s “easy to cook, easy to heat, and easy to eat.” The post-1990s generation is driving a boom in pre-cooked meals.

Within an hour, a hearty dinner of traditional Chinese cuisine is served on the table.

Data from Research firm iiMedia shows the market size of China’s pre-madecuisine last year reached 346 billion yuan, about 54 billion U.S. dollars. It is projected to rise at a compound annual growth rate of 20 percent by 2023.

Guolian Aquatic Products is one of the leading seafood companies that jumped on the bandwagon, not only in domestic market, but also in more than 40 countries worldwide.

When the Regional Comprehensive Economic Partnership took effect on January 1, Guolian received the first certificate of origin for pre-cooked seafood, set to be exported to Australia and Singapore. 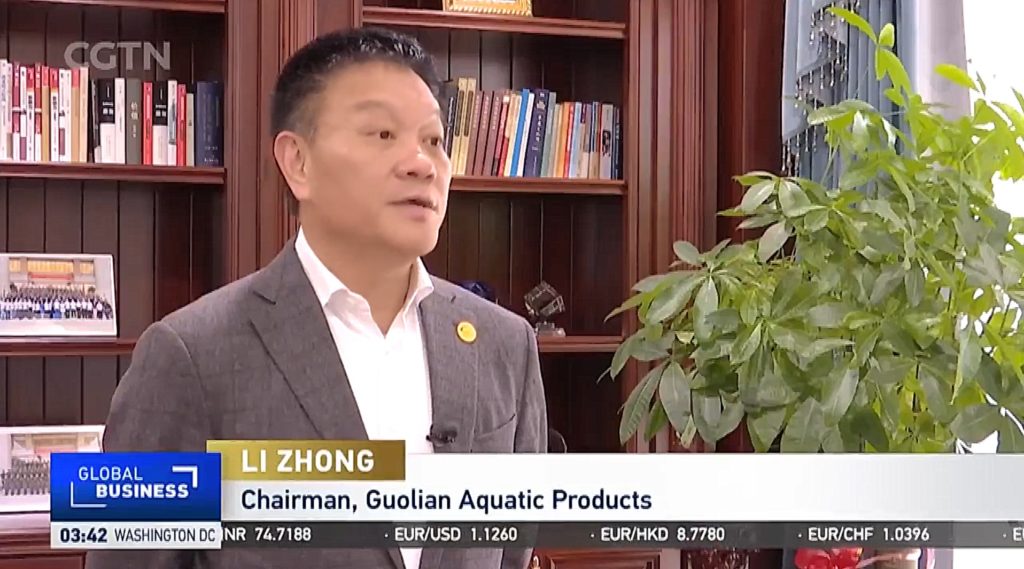 LI ZHONG Chairman, Guolian Aquatic Products “The revenue of pre-cooked food in the first three quarters of 2021 was around 600 million yuan, and it kept growing in the fourth quarter. We mainly export to the United States, Europe, and RCEP member countries. After the RCEP takes effect, it is expected to see a substantial increase, especially in the first quarter of this year.”

The emerging consumer trend also enables farmers to share the value-added benefits of the industry.

Freshwater aquaculture farms in the city of Wuchuan harvested about 150,000 tons of cultured freshwater fishes in 2021, a gross revenue of 1.5 billion yuan, or 236 million U.S. dollars.

QIU JIANZHONG Wuchuan Hongye Aquaculture Technology “The whole fish pond we can see is about 113 hectare. The output value last year has reached of five million kilogram, with a profit of 1-2 yuan per kilogram. Since Zhanjiang’s exemplary aquatic enterprises like Guolian began to sell pre-cooked dishes, and Wuchuan named itself the ‘hometown of grilled fish,’ the price of tilapia is very ideal now.”

XU HUA Zhanjiang, Guangdong Province “Fish is always part of the Chinese Lunar New Year’s Eve dinner, because it represents abundance. With more pre-cooked foods going global, Chinese farmers look forward to a prosperous year ahead. We wish everyone a big harvest and much wealth in the Year of the Tiger! Xu Hua, CGTN, Zhanjiang, Guangdong Province.”

(中、英双语)春运中，他们是春天的代言 During the Spring Festival travel rush, they speak for spring!