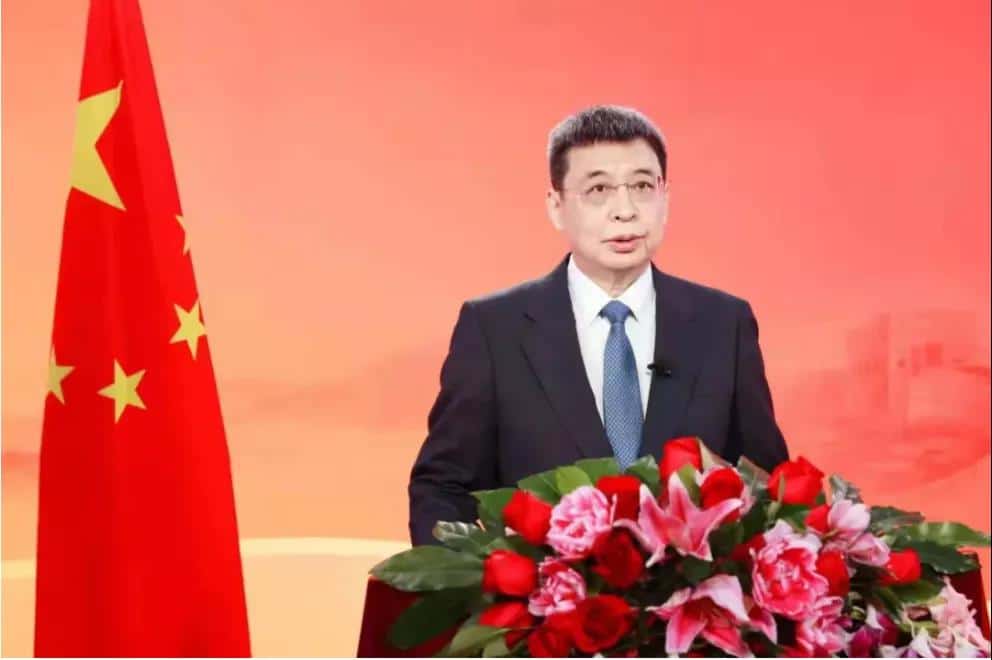 The following is the full text:

In 2021, the Communist Party of China（CPC）fulfilled its first centennial goal. It is leading the Chinese people on the journey toward the second centennial goal. In the past 100 years, the development of the CPC and the People’s Republic of China has been closely related to the history of overseas Chinese in modern times. In those dark but awakening years before the founding of the CPC, many overseas Chinese contributed to the thought and cultural movements, including the introduction of Marxism. During the War of Resistance against Japanese Aggression, many overseas Chinese offered all they had and even sacrificed their lives for the country, leaving behind touching stories. In the early years of the People’s Republic of China, many overseas Chinese managed to return to help develop pillar industries. During the booming era of reform and opening up, many overseas Chinese were the first to make investment or start their businesses in China, helping raise the curtain on China’s rapid economic growth. In the New Era, overseas Chinese maintain their important roles as participants in the Belt and Road Initiative, facilitators of mutual learning and exchanges among civilizations, and our companions in the Chinese rejuvenation. As President Xi Jinping has said, when all Chinese people, both at home and abroad, focus their ingenuity and energy on the same goal, we will surely make the Chinese rejuvenation a reality.

At present, the COVID-19 pandemic has not yet come to an end, the international situation remains complex, unilateralism is on the rise, and racism is rampant. We feel all the challenges that overseas Chinese are faced with.

It is all the more important that in the face of the most profound and unprecedented changes in a century, we should draw wisdom from enduring Chinese civilization.

Chinese civilization is resilient. Chinese people face challenges head on, and rise up stronger from each setback. Despite countless twists and turns in thousands of years, we remain true to our original aspirations. Overseas Chinese have inherited the cultural traits of self-reliance and self-esteem. Whether in the past or at present, in the face of racism you have fought bravely for your rights and interests, your survival and development, and contributed to cultural pluralism and global well-being.

Chinese civilization advocates peace. The Chinese nation has achieved modernization through its own effort rather than colonialization. China wins friendship through mutual cooperation rather than hegemony. Overseas Chinese have inherited this Chinese tradition. They have never made trouble in their host countries but have achieved success through diligence, modesty and dedication, winning recognition in the countries where they live.

Chinese civilization is inclusive. It objects the either/or approach and binary opposition. It adheres to seeking harmony in diversity. China has a wide range of ethnic groups and religions, economic ownerships and social classes, but it can always find unity in diversity and maintain social solidarity and stability. Overseas Chinese have carried on this cultural principle. Confronted with social division of some countries, they always stay rational and calm, promoting diversity and inclusiveness in their host countries.

Chinese civilization is open. It learns from other civilizations while maintaining its own features; it shares its fruit with the world while developing itself. Overseas Chinese have inherited this cultural quality. They have maintained their own traditions while integrating themselves into the culture of their host countries, promoting openness and integration among different civilizations.

The world faces many common challenges, including climate change and widening wealth gaps, racism and identity politics, digital divide and technological hegemony. They require the whole world to go beyond ideological differences and find solutions through rational dialogue and mutual learning among civilizations. Overseas Chinese should work together with the people in their host countries to eliminate estrangement and discrimination, and to eradicate misunderstanding and prejudice through inter-civilization exchanges. It will become all the more important for overseas Chinese to build bridges for people around the world when some try to “decouple” and “build walls”. Only when Chinese civilization is properly understood, can overseas Chinese be properly understood. Only when diverse civilizations coexist in harmony, can everyone enjoy peace and prosperity.

The Spring Festival is just around the corner and the Beijing 2022 Winter Olympics is kicking off soon, which will bring more unity, confidence and strength to the world. Let’s greet the arrival of the Year of the Tiger together with our best wishes for each other and expectations for a better future. I wish you again a happy Chinese New Year, as well as a happy, healthy and successful Year of the Tiger! Thank you!